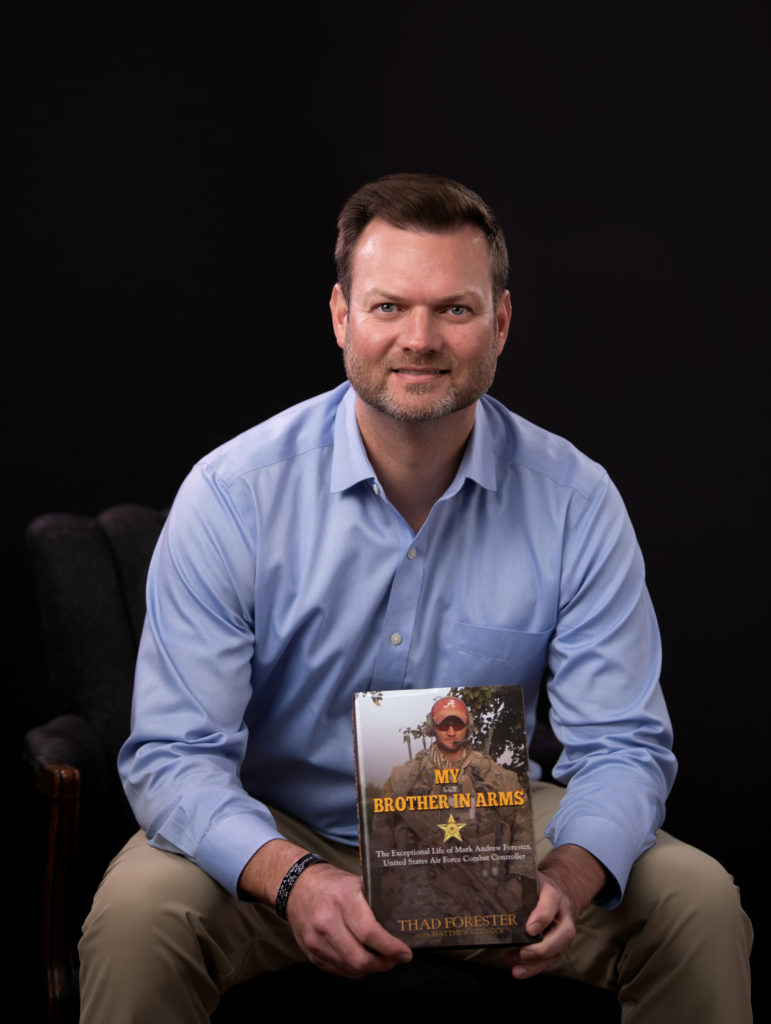 I chose to write “My Brother in Arms” after my little brother Mark Forester was KIA in Afghanistan in 2010. Within a few days, I knew I had to write about Mark’s life and why men like him give up everything to serve and protect those they don’t even know. I hope that by taking three years to research and write the book, it allowed me to work through the “fog” of Mark’s death, which I experienced, and have a clear perspective on his life and the book’s purpose.

It was important for people to know that Mark was a full-time missionary for two years, then got a Bachelor’s degree in Business Finance and could have pursued the much-safer life with a ‘normal’ job. This would have allowed him a better opportunity to find his wife and have a family. Instead, he chose the path of special operations as a combat controller. The world needs to know about heroes like Mark. He was a warrior for God and country.

Why “My Brother in Arms” had to be written

In many ways, Mark was like most of our men and women who volunteer for military service in our great country—selfless, committed to teamwork, and determined to fight evil.  However, I knew Mark was unique—a cut above the rest.  It didn’t take being his brother to know this—shoot, those who knew him will say the same.  Mark doesn’t come from a family of military service.  Our dad was in the Army National Guard in his early adult life and our brother Joseph is in the Air Force as a doctor.  But he didn’t grow up with military influence.

Everyone has a story.  It really all started when Mark was serving a voluntary two-year mission for our church.  He was stationed in the Oakland, CA area for those two years.  He was one year into his full-time service when the attacks of 9/11 happened.  Even though he couldn’t keep up with the news as a missionary, he felt a burning desire to go fight the evil that had attacked us.  Feelings that come from deep within don’t leave.

He had a plan though—to finish his mission and get a college degree.  He really didn’t care about the degree as much as joining the military, but he felt he should do it, plus he’d promised our mom he’d graduate college.  I can’t say he wasn’t tempted to quit college early and join the military with the option that school would always be there.  But, we all know how hard it would be to go back once quitting.

So, Mark got his business degree in Finance and then enlisted in the Air Force in June 2007.  Enlisting was a deliberate decision because he wanted to work his way up the chain.  Plus, he believed his opportunities of getting better deployments in the face of the enemy would be increased as an enlisted man.  This decision was met with great opposition by our family and most all who knew him.  But, he wouldn’t even consider going in as an officer, or “pencil pusher” in his mind.

He entered Basic Military Training at Lackland AFB as a 26-year-old college graduate with a clear mission—to become a combat controller (CCT) and inflict maximum injury and death to those he was tasked to defeat.  By all accounts, Mark excelled in his training pipeline and became combat-mission-ready sooner than a vast majority of others in special tactics.

When deployment time came, he was assigned to a firebase that was coveted by CCT’s because it was so active—meaning he was guaranteed to confront the enemy on a regular basis.  This decision was questioned by many.  You see, it was an area where your average CCT on his first deployment wouldn’t go.  So, more experienced controllers felt they should have been sent.  Many were leery that Mark was going, since he hadn’t been deployed yet, but he quickly erased everyone’s fears when reports of his actions and leadership were witnessed and shared with leadership.  Then, to back it up, his ability to protect his team by directing close air support—and exposing himself to the enemy–didn’t go unnoticed.

To quote his commander, “You do not wander into an Air Force recruiter’s office and suddenly find yourself out at Firebase Cobra…  You have to want it, and you have to work extremely hard to get there.  Mark was a volunteer many times over, and he excelled throughout two years of training and some of the toughest schools in the Department of Defense.  Mark consciously sought the path he was on, and it was truly a path less traveled.”

Mark could have chosen many other careers that wouldn’t have taken him to war and looking death in the eye almost daily for several months.  He could have stayed around his family, continued looking for the right girl to marry and start his own family.  But, his mission was to fight terrorists head-on.  Mark recognized his mission and accomplished it.  Not only did he accomplish it, but he was fixed with a determination to conquer our enemies.  Those who knew Mark as the chubby, late-bloomer in high school would be amazed at the large warrior he became.  He worked extremely hard to transform his body while in college.  The kid who was cut from the 9th grade basketball team because he was too small and had lost desire to play, became a confident, imposing operator who was a consummate professional.

He wasn’t perfect.  I try to stress this in the book.  Mark wasn’t all the sudden a super-human because he was killed.  However, my focus was to allow his example to teach patriotism, faith, moral character and courage through the stories of those who served beside him, and who can witness that he truly was exceptional.  Even in the moments he was killed, he was putting himself in harm’s way for others.  He died as he lived, full of love for his country and confidence in his cause.  He represents the kind of hero our country needs to honor and remember.

What is your mission?

And so, the book had to be written to share that no matter what our missions are on earth, we can and should work to accomplish them.  And we should be consistent in our values no matter the circumstances we are placed.

There are many takeaways from Mark Forester’s life.  I’ll leave it to the reader to figure how it applies to you.